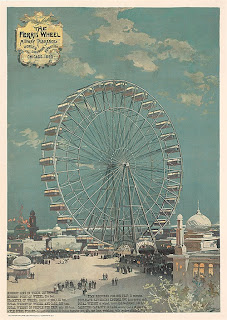 The Project Management Body of Knowledge (PMBOK) divides project management into nine categories, or Knowledge Areas.  One of these is Quality Management, and includes all the processes required to ensure a quality result.  Part of these, of course, would be the testing processes.
Going back to the 1893 Columbian Exposition in (see my previous posts), was trying to find something that would outdo the Tour d’Eiffel at the fair.  George Ferris came up with the idea of a giant wheel, known simply today as the Ferris Wheel.
The first wheel for the Columbian Exposition was over 80 metres high.  There were 36 cars, each accepting 60 passengers for a total capacity of 2,160 riders.  And that’s the capacity for just one ride.
With that many passengers, you’d think there would have been some pretty impressive testing of the wheel before it was officially opened to the fair-goers.  As it turns out (no pun intended), the first test was done after the wheel was built but before the cars were attached.  The test: 1 complete revolution of the wheel.  That test was deemed successful – the wheel turned successfully, and remained standing.  There was a brief raining down of spare nuts, bolts and possibly some forgotten tools.  But the test was completed and successful, with no further thought given to the metal rain.
The next test was performed with a few of the cars attached.  This time passengers rode in the cars – Ferris’s wife, and assorted dignitaries. Some of fair-goers also managed to get in on the test as well: some 100 unplanned passengers climbed aboard one of the other cars.  Nobody was thrown off the ride.  Fortunately, the second test was successful, even with the overloaded car filled with stowaways.
The risk of allowing passengers aboard the wheel with such minimal testing was incredibly high.  If there were any problems with the wheel, the results could have been catastrophic.  In fact, when the test with passengers was run, there was no plan for rescuing passengers in the event the wheel stopped with people stranded at the top.  Oddly enough, the risk of the wheel being used for suicide attempts was considered and addressed: all windows were glassed in and covered with grilles.
The Ferris Wheel was an engineering feat.  Of course, if this were to be built today, there would be much more thorough testing done, and well before any passengers were included.  More detailed risk analysis would be done, with mitigation and contingency plans in place.
This is why risk management, quality assurance and quality control are all knowledge areas of project management.
Happily for the genealogist, the potential consequences of risks and lack of adequate attention to quality through testing are not as dire.  That said, it’s very easy to spend significant time researching the wrong families.  In my research, many of my ancestors have the same names, so it’s important to be careful to confirm and cross-check things like dates and locations.

No matter the size of the project, risk analysis and testing is key.

(Repeat recommendation: The book, "The Devil in the White City" by Erik Larson, is a great example of lack of project management.  Plus it's a good read!)
Posted by Roxe Murray, PMP at 8:30 PM